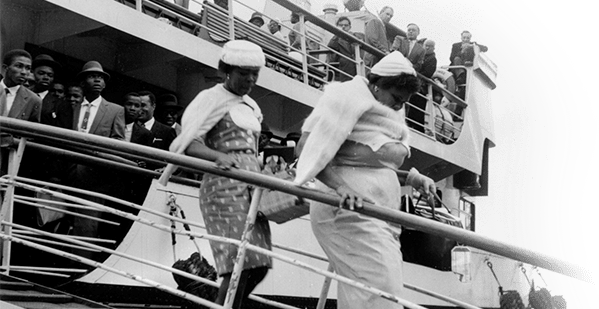 Pardna App’s origin story began many years ago with the arrival of Caribbean immigrants aboard the passenger ship Empire Windrush in the UK.

After the Second World War, labour shortages and a weak economy in the UK led the British government to send out an invitation to Caribbean people to come and help rebuild the so-called “mother country”. It seemed like a great opportunity for those who accepted the invitation, no doubt excited at the prospect of a new start, or being able to earn enough to send funds back home to the family some had left behind. And others, like my parents, had plans to only stay for a few years and then return back home (that particular plan didn’t quite pan out for my parents).

However, despite promises of opportunity and a warm welcome, many found the reality anything but.

Some employers paid the fare for Caribbean people to come to the UK and then recouped the cost of the fare through salary deductions. However, this meant the workers were tied to that particular employer, and when workplace discrimination meant a lack of options for progression to higher paying positions and no chance to clear the debt sooner or save more money for yourself, it was a cruel cycle.

Discriminatory practices from banks and lending institutions also meant that loans for immigrant borrowers carried a much higher premium than everyone else, if they were even offered a loan at all.

So, faced with these financial obstacles, they turned to the system they had used back home – the pardna system. This system of communal lending and saving was essential for them at the time, allowing them to obtain the things they needed such as deposits on property, white goods, or trips back home. The key component for the system was community – the tight-knit Caribbean community in their local area, family relations, church, social groups, and the other Caribbean colleagues that they bonded with at work.

Pardna allowed them to access low cost loans from the collective instead of the restrictive and punitive loans offered by the banks and lending institutions. They were able to reach their saving goals to purchase the things they need.

They went from sharing the coin-operated cooking facilities on the landing with several other families cramped in the upstairs single rented rooms, to finally moving into homes of their own, complete with their own fridge, stove, sofa – and that glass cabinet with the floral decal.

Over the years Caribbean people eventually progressed in their professions, and credit became more accessible to all. But the lack of trust in financial institutions (understandable given how we had been treated), a desire to rely on a proven system with people you know and trust meant the practice of pardna never went away. Immigrants from Africa and Asia also came to the UK and maintained their flavour of pardna, proving the pull of cultural connections was just too strong.

We’ve come a long way from its origins in the UK via the Windrush generation, to the development of Pardna App today. For financial inclusion, a financial boost and for instilling good financial habits, pardna has worked for many people for many years. Here at Pardna HQ we have the DNA of those who pioneered the widespread use of pardna in the UK and we truly believe that Pardna App can help people from any community and all walks of life.